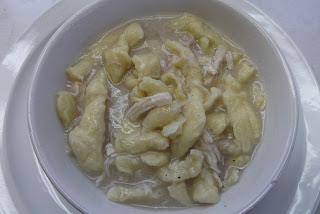 This is hands down, the most requested dish, I dread to make. I think it's because they are so messy. But they are really simple, just difficult to explain. So, bear with me.
I cook this about two to three, times a month, but twice a week would still not be enough, for my brood of 30, and counting. Every week I make a shopping list, and ask, what sound good, this week, someone always calls out, "Chicken and noodles", and they're met, with an icy stare. My epitaph will read "Her noodles will be missed."
If you laid, every batch of dough, I've rolled, end to end, I think I've rolled enough noodles to take me around the globe, at least once.
It's a curse, being Noodle Royalty.... My kingdom, for a pasta machine!

I've been putting off sharing this recipe, because I don't actually, use measurements. I just beat some eggs (36 at every holiday meal) throw in, a tiny amount of baking powder, then flour, adding more, until it 'feels' right. These are very, dense, thick, and almost, chewy. Just the way they like 'em., but you can roll them thinner, and cut them smaller, to suit your taste. They are very similar to Reames frozen noodles. I tried to sneak the frozen ones, in the pot once, but they could tell the difference. What the heck, noodle connoisseurs.


Preparation:
I start out by stewing a chicken, as in the recipe for chicken and dumplings.
Add water to the pot of shredded chicken to fill a 4quart pan, half full. (this is enough broth, for one batch of noodles, but you could put this in a larger pot, add about 3quarts of water, total, and make two batches, if you like.)
Adjust seasonings, it usually needs more salt and pepper.
Make the noodles.(directions below)
Bring to a full, rolling boil, before adding noodles.
Drop them in, one at a time. Stirring them in, toward the end. (they cook almost instantly, and float to the surface, the last of the noodles need to be stirred or, pushed into the boiling broth.)
The broth cools as the noodles are being added. Once you've added them all to the pot, wait for it to come to a full boil, again, then turn off the burner. They're ready to serve. The flour from the noodles, dissolves and makes the broth, gravy-like.

Whisk together, the eggs and baking powder, until well beaten.
Stir in 3cups of the flour, beating with a spoon until it looks like a batter.
Stir in as much of the 2-1/2cups remaining flour as you can, kneading in the rest, until you have a firm dough, that is still a bit sticky, in the center. Set aside 30 minutes, to let the dough cure. (This makes it easier to work with) If you are opting for the no-roll method, The dough is now ready to be added to the boiling broth. If not, Sprinkle 1/2cup of flour onto a flat surface, Split the dough into 2 pieces. Roll out 1 piece into a 1/8inch rectangle.( It doesn't have to be perfect) Add more flour to the top, and run your hand across it to distribute it evenly. ( This keeps it from sticking together, when you roll it.) Roll the dough like a jellyroll. cut. I added photos to make a little more sense of my insane directions.

The no-roll method:
One holiday, I forgot about making the noodles, until the last minute. God forbid, I try to serve Turkey without noodles. WOOP WOOP! an alarm would sound, throughout the land. The first of the seven seals, will have been broken. ( F.Y.I.-Turkey makes the best broth, for noodles) I had absolutely no room, anywhere to roll them, so I devised a no roll, plan. I kneaded in enough flour, so the the dough wasn't sticky, then pinched off, little pieces of the dough, dropping them into the boiling broth. They tasted exactly the same, just shaped irregularly. They got their noodle fix, and I didn't have to clean up the flour, aftermath. I still make them this way occasionally, when I'm feeling lazy. 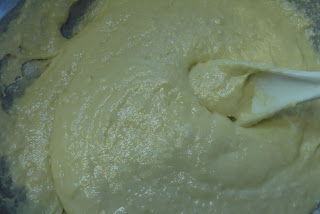 Whisk the eggs and baking powder, stir in 3cups of flour, and beat into a batter. 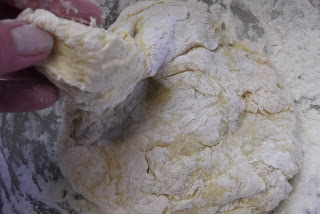 Knead in as much of the flour as you can, to make a firm dough. Let it rest 30 minutes. 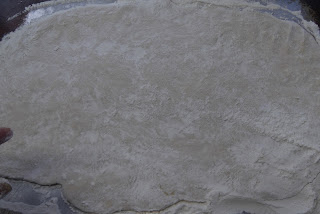 Sprinkle1/2cup of flour onto a flat surface. (I use a large cookie sheet, easier to clean than a counter-top) Roll into an 1/8 inch rectangle. Sprinkle more flour on the surface, and use your hand to distribute it across the dough. 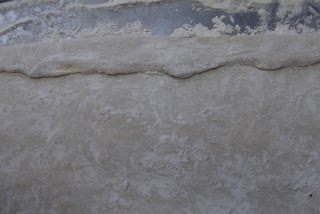 Begin rolling one of the longer sides, toward the center. Smooth more flour across the folded dough. It takes a lot of flour, to keep the noodles from sticking together. 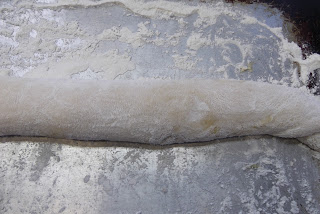 Continue rolling and smoothing more flour, after each roll. 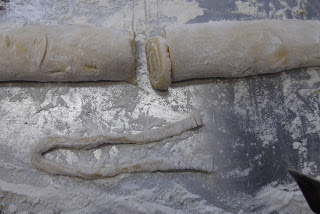 Cut the dough, unroll the noodle, and toss it in the flour on the rolling surface. Continue cutting and tossing them in flour. 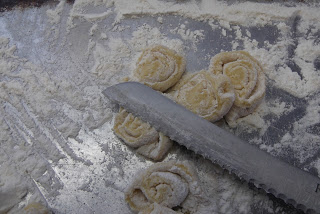 I've found, the best knife to use, is a sharp bread knife, dipped in flour. As long as it has short "teeth?" Let the knife do the work, If you press too hard, it will crush the dough, and the noodle will stick together. Now they are ready to go into the boiling broth.