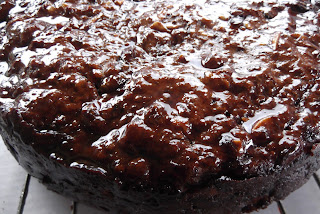 Trinidad Black Cake
Black cake is traditionally served at Christmas and at Weddings, throughout the Caribbean.
It's a rich, flavorful, rum infused fruitcake, blackened by burnt sugar syrup, that adds a distinct caramel flavor to the batter.
In Trinidad, it is customary, to allow the fruit to soak for a year, before using it.
There is also a quick soak method, where the fruit is simmered in 1-1/2 cups rum and 1/2 cup cherry brandy for 10 minutes, then cooled before using.
There a many variations of this cake. Some are moist and dense, some are cake like. This is a moist version.


For the Fruit:
zest of 1 orange
zest of 1 lime
zest of 1 lemon
1 cup dried cherries- I used a 6oz. package
1 cup dried prunes-halved
1 cup currants
1cup raisins
1/2 vanilla bean-split
1cinnamon stick
1-star anise pod or 1/4tsp. ground
1/2 cup cherry brandy
A fifth of spiced rum- you will use about 3/4 of the bottle
A large jar with a lid

Preparing the fruit:
Split the vanilla bean, scrape the seeds into the jar, then drop in the bean.
Add the zest, fruits and spices to a large jar.
Pour in the brandy plus enough rum to cover the fruit.
Place the lid and allow it to steep for at least 3 weeks. 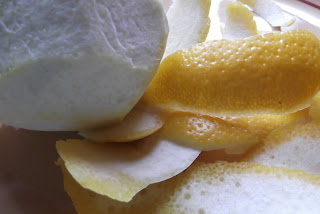 This time I thought I would try peeling the fruits, and cutting them into tiny julienne slices, like you find in candied citron. 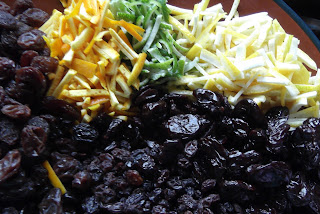 Even though this will be put in a food processor later, I halve the prunes. 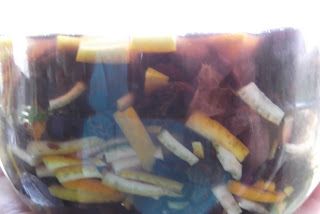 Add everything to a large jar, (split the vanilla bean, scrape the seeds into the jar, then drop in the bean). Place the lid, and steep at least 3 weeks. This old, gallon pickle jar has gotten a lot of use over the years. It's made lots of vinegars and liqueurs. 3 of my grandchildren, once ate an ENTIRE GALLON of pickles, in one weekend. I could not believe it. All that salt! I don't buy them pickles anymore, SHeesh! 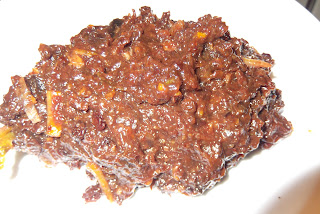 Place a colander over a bowl and strain the fruit, reserving the liquid for basting on the finished cake. Add the fruit, a little at a time, to a food processor, and pulse until you have a chunky paste. set aside. This looks a bit like poo, but it smells amazing, and intoxicating! I wound up with about 3 cups of fruit, and 1/4 cup leftover juices. The fruit absorbed the rest.

For the cake: Adapted from a recipe by Ramin Ganeshram .
Make the burnt sugar syrup ahead of time, so it has a chance to cool before use.
2cups flour
2tsp. baking powder
1tsp. cinnamon
1/4tsp. nutmeg
a pinch of allspice
2 sicks of butter-softened
1 cup brown sugar
1/2tsp. almond extract
1/2tsp. vanilla extract
6eggs
All of the recipe for Burnt sugar syrup
All of the processed fruit
1/2cup slivered almond
1/2 cup chopped walnuts
2-one gallon storage bags

Preparation:
Preheat the oven to 350*
Spray 2 round cake pans with cooking spray.
Whisk together the flour, baking powder, cinnamon, nutmeg and allspice. Set aside.
Add the butter and sugar to a large bowl. Beat until fluffy
Add the vanilla and almond extracts, mix to combine.
Add the eggs, one at a time, beating well after each addition.
Add all the burnt sugar syrup. Beat into the batter, scraping the sides.
Stir in the fruit and nuts, mix to combine, then beat about a minute.
Stir in the flour mixture, mix to combine, then beat until fluffy.
Divide the batter between the 2 baking pans.
Bake 30 minutes, lower the temperature to 250* bake and additional 30-40 minutes, or until a toothpick inserted into the center comes out clean.
Cool in the pans about 15 minutes. Brush on the leftover juices from soaking the fruit. or mix together 1/2 cup rum with 1/4 cup cherry brandy.
Let stand until cool.
Remove the cakes from the pans,and put them in the storage bags.
Refrigerate for three days before serving. 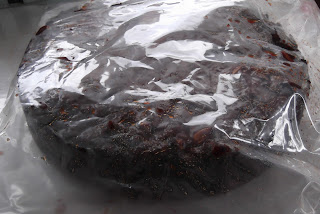