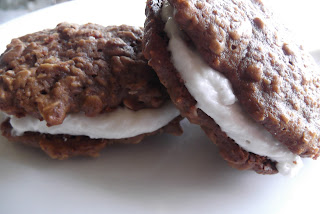 I have noticed, over the years, that my two favorite oatmeal cookie packages have an ingredient called raisin paste, I've tried to find it at the grocer and on the internet, no luck. So I decided to add a little boiling water to raisins and puree them in the blender, then altered my oatmeal cookie recipe, so I wouldn't wind up with a flat, oatmeal, disk thingee.
Then I noticed on the snack cake package that there was molasses and cocoa. (OK, I had a couple of those too... it was for the sake of science!)
The cream filling I used was fluffier than the packaged ones. I added more confectioners sugar. (I think they use a butter-cream without butter, only shortening, just a guess, I'll try it next time.) But these were so good, I don't think the texture of the filling mattered in the least.
They came out a bit spicier than I had intended, but my family told me not to change a thing. (while they were devouring the last of my precious-es)
They were snatching these up as fast as I could fill them, so I'm not sure how many this recipe makes, but apparently... not enough.  At least a dozen filled pies.

Preparation:
Preheat oven to 350*
Add the raisins to a small bowl and pour the boiling water over it. Set aside to cool.
In another bowl whisk together the flour, baking soda, salt, and spices. Set aside.
Put the raisin mixture in the blender and add the molasses and corn syrup. Puree.
In another bowl, beat the butter and sugar, until fluffy.
Add the egg and vanilla, beat about 1 minute.
Add the raisin puree and beat to combine.
Add the flour mixture a little at a time, beating until well combined.
Stir in the oats.
Drop 1tbl. at a time onto a greased cookie sheet.
Bake until the edges are just beginning to brown, cool a few minutes, remove from the cookie sheet.
Cool completely before filling. 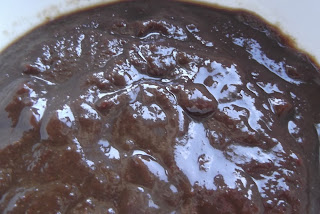 Instructions
Add the salt to the hot water, and mix to dissolve.
Beat all other ingredients on high, until fluffy.
Add the cooled salt solution and mix.
Spread between cooled cookies.