Sweet and Sour Ham Bake with Yams and Zucchini 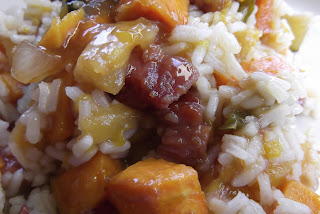 Sweet and Sour Ham Bake with Yams and Zucchini


Like most Americans, when I think of yams, I think if that brown sugared, marshmallowed holiday dish, that never seemed to find it's way to my plate, as a kid. But when I became a mother, It became a top priority to make sure my kids ate nutritious foods. I learned that Yams are one of the most nutritious you can find.( beans are at the top of the super-food list) It has a long list of nutrients: nutritional value -1 cup yams
I watched a documentary once, where a group set out to rescue the indigenous population of a remote island, from starvation.
They had no real food sources, no game, And they were dying off at a high rate. The group taught them how to grow yams, claiming that they have nearly everything a human needs to survive. Although, I'm not 100% sold on that concept, I do see the value of these tubers.
I love sweet and sour. I have used many different combinations, but this is my favorite. The problem with this recipe is that it makes a lot.(it serves at least 8) I can't figure out a way to downsize it. I freeze half of it, and have it again the following week. The pineapple-peach combination is awesome. OK, I'll shut up now and get on with the recipe.

Preparation:
Preheat oven to 375*
Mix together the Ham, zucchini, yams, bell pepper, and onion and spread them out on 2 shallow pans. (I use pizza pans.)
In a bowl, whisk together the brown sugar and corstarch.
Add the pineapple and peaches(including their juices)
Stir in all other ingredients and pour over the vegetables in the pans. (trying to divide the liquid evenly in both pans)
Bake for about 1hour 45minutes (stirring every 30 minutes) or until the yams are tender and the liquid thickens into a semi-thick sauce. Serve over Rice. 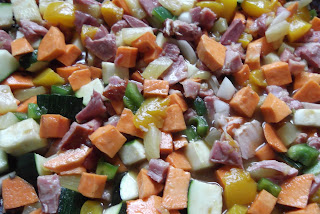 Spread everything out in 2 shallow pans. I guess you could parboil the yams first, to cut down on cooking time, but you would lose nutrients that way. 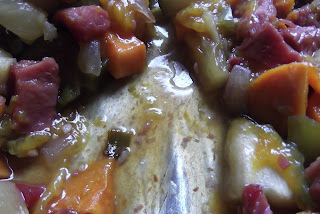 Bake about 1hour 45 minutes- or until the yams are tender and the sauce thickens. Serve with Rice.