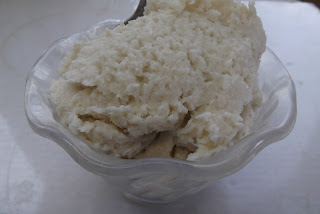 
I guess, one of these days, I'll break down and buy an ice cream maker, but I don't eat the stuff very often, so it's not very high on my list of priorities. But I've been running across a lot of recipes for 15 minute ice cream in a bag. I became curious, and wondered if you could skip the ice and rock salt process, and just toss the bag in the freezer. That's just what I did.

I checked after an hour and noticed that it was beginning to solidify around the edges, I squeezed the bag a few times, then put it back in the freezer. It was getting late, I went to bed thinking I would wake up with a solid cream-cube in the morning. Lo and behold, I had ice cream. Not just ice cream, but really good ice cream, much better than anything I buy.

It reminded me of of the kind my Great-Grandma would make in the back yard, once in a while. If you made the mistake of running past her while you were playing, she would quickly bamboozle you into taking a turn at the crank, "It's fun, come on and try it for a while." I guess I always had sucker written on my face.
I haven't had that delicacy since I was about 8 years old. It's funny, how after 40 years you can still remember exactly what something tastes like, but call your Grandkids by the wrong name. I usually go through three names, before I get the right one. One of my Grandmothers who had Alzheimer's disease, would forget who we were, and call all of us "Lou" (one of my cousins), So I tease my Grandkids, by occasionally calling them all "Lou", they get a kick out of it. I'll have to make a batch of ice cream, the next time the Lou-s come to visit.

(Update: the second batch I made, froze solid, I had to thaw it, for 1 hour, knead the bag until I crushed it into kind of a slushy texture, then refroze it, it was fine after that.)

Ingredients:
1 quart of half and half
1tsp. vanilla
1/4cup sugar
a gallon freezer bag

Preparation:
Whisk everything together, and pour it into the freezer bag.
I removed the air, but I'm not sure if it's necessary.
Freeze overnight. Squeeze the bag several times before serving.
Posted by Unknown at 7:11 PM

Email ThisBlogThis!Share to TwitterShare to FacebookShare to Pinterest
Labels: sweets