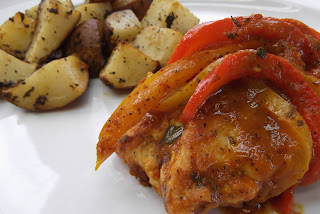 
Pan grilled chicken and sweet peppers, simmered in a mildly hot, Portuguese-African sauce. I love this, quick and easy too. I've done a bit of research on this dish, and have been altering my original recipe, which, in turn, was altered from one of Jamie Oliver's 30 minute meals. It has a much deeper flavor now. I'm removing the old post.

Piri is Swahili for pepper, particularly, the African birds eye chili. It is said that this dish originated in Mozambique. The peppers were believed to have been brought to Africa, by Portuguese settlers.  It always seems, the most complex sauces come from combining cultures, no matter what part of the world it happens. Such as the The Caribbean, Mexico, the Louisiana bayou, just to name a few. Many of my favorite dishes derive from these cross cultures.

I've made this using green bell peppers, it was almost as good, but the sweetness of ripe bell peppers really compliments the sauce. I think I'm also going to try: Grilling the chicken outdoors, then basting on sauce, like BBQ sauce. I let you know how it turns out.

Ingredients:
1tsp.-plus-1tbl. oil
boneless, chicken breast-thawed and flattened between two pieces of plastic-this sauce is enough for eight
1-to-3 Ripe bell peppers- julienne sliced (I use 1red,1yellow and 1orange, for a 3lb. bag of chicken breast.)
1/4 cup water

Preparation:
Puree the sauce ingredients in a blender, until smooth.
Heat the tsp.of oil in a skillet. Saute the peppers until crisp-tender, remove the peppers from the skillet.
Add another Tbl. oil to the skillet, and turn the burner to a high flame.
Brown the chicken on both sides, cooking until the chicken is cooked through and lightly browned. Most of the browning occurs at the end of cooking.
Add the 1/4 of water to the hot pan, to de-glaze the bottom of the pan. This adds more flavor to the dish.
Add the peppers back to the pan, along with the sauce.
Simmer about 3-5 minutes, to allow the chicken to absorb the sauce. Serve hot. 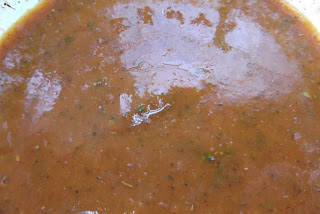 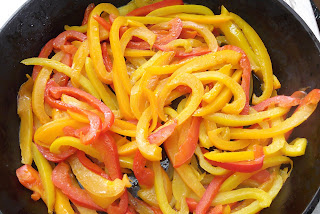 Saute the peppers until they are crisp-tender. 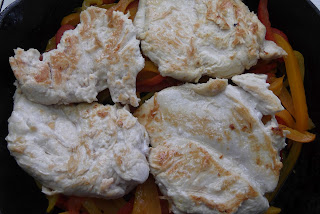 Pan grill the chicken until it is cooked through, and lightly browned. 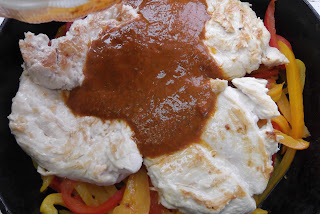