Creamy Tuna and Noodles- The One Pan Wonder 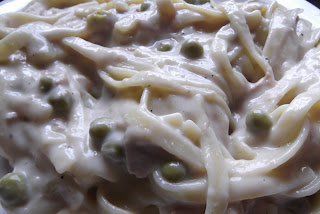 It wasn't until I was 10 years old that I realized Mom was a really good cook.
I spent 2 months in the hospital, (most of it in traction) starving on their so called "food". The first thing I asked for, when I came home, was this dish.  So, I guess this fits into the comfort food category.
Mom used egg noodles, but I prefer the thicker texture of fettuccine and kluski noodles instead.
I've always planned to make this dish from scratch using celery, mushrooms and homemade noodles, I'll get around to it someday. Besides, it's nice to have meals like this, that you can throw together quickly.

Ingredients:
2 packages noodles-12-16oz. each
2Tbl. butter
4 cans of tuna in water
2 cans cream of celery soup
1 can cream of mushroom soup
1 can of sweet peas
1 can evaporated milk

Preparation:
Cook the noodles according to package directions.
Drain the pasta and return it to the pot.
Stir in  the tuna (including the water)butter, soups and milk.
Heat until it almost comes to a boil.
Stir in the peas (including the water) and heat another minute or two to heat through.
Salt and pepper to taste.
Serve with dinner rolls.
Posted by Unknown at 1:58 PM