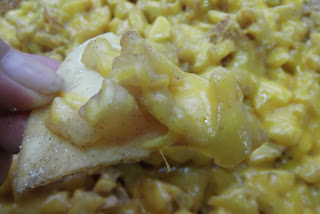 If I want Tex-Mex, I always want Taco Gringo, It's a local chain that serves simple, fast, cheap, addictive food. It's been around, at least, since I was a teenager.  I crave their Super Sancho, not to mention the Super Salad and the best Enchiladas I have ever eaten. They have a dessert called Mexican Apple Pie, that of course, I had to try and duplicate. It's served like nachos. You could use canned apple pie filling, but I always thought that stuff was way too sweet. Here is my version.

Preparation:
In a large sauce pan, combine the apples, water, cinnamon and sugar, cook until the apples are soft, and the moisture has evaporated. About 15 minutes. Set aside to cool.

For the chips. Mix together cinnamon and sugar.
I keep a large old spice container full of cinnamon and sugar mixture, for these and cinnamon toast.
Fry the wedges until lightly browned, less than a minute.
Sprinkle with the cinnamon mixture, or toss them in a bowl of the cinnamon mixture while they are still warm.
Spread the chips in a baking pan or 2 pie pans. (one that you plan to serve it in)
Spoon the apple filling, evenly over the chips.
Top with the shredded cheese, and sprinkle with a little more cinnamon.
Bake at 375* until the cheese has melted. Serve warm. 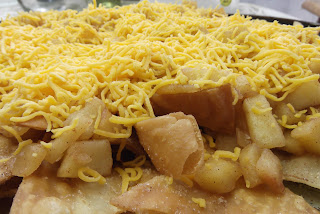