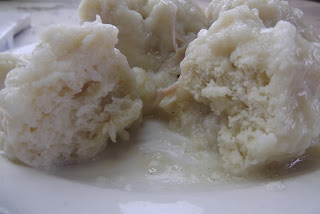 I consider myself very lucky to have gotten to know two of my Great-Grandmothers, one lived to be 100 years old. I wish I had paid more attention when she tried to teach me how to make chicken and dumplings (Her signature dish), it took a couple of decades to figure it out on my own. I shudder to think of all the things she could have taught me, had I been inclined to learn.
She was born in 1889, and passed in 1990, Just imagine the huge changes that came to pass, all around her, but she was very spunky and fought them tooth and nail.
When I was a little girl she still used a hand pump for water, an out-house, and a wood burning stove, to cook on. One year my Grandfather piped in water and natural gas for her. She was OK with that, but they never heard the end of replacing her beloved wood burning stove with a gas one. She pretty much gave up cooking after that, saying she couldn't cook on that "blasted contraption". I can certainly understand that one, My husband has bought several expensive sets of pots and pans for me, as gifts, but I still cook on my old, original set. (30 years old, and looks it.) It is not possible for me to cook this dish, and not think of that feisty German lady.
Her Family came here when she was very young. The whole family was musical, and traveled around the country, performing in Vaudeville. That's how she met my Great-Grandfather ( a magician and violinist in Vaudeville) She was only 14 when they married. (that was common in those days) and stayed married their entire lives.
I think that alone is truly amazing. This isn't Grandma's recipe, but still a good one.

I think the best tasting dumplings and noodles, come from stewing a whole chicken. But not all families are as large as my brood, so it's not really practical for them. I make 4 batches of dumplings for an entire chicken.
Really, you only need the finished broth for the dumplings, You could save most of the chicken for a meal the next day, like chicken salad.
You can get pretty good results, from using a chicken breast or two in chicken broth and water, along with the celery and onion. You could also add vegetables if you like such as carrots, peas, and slice the celery.

Preparation:
Add the Chicken, celery, onion, salt and pepper to a 4 quart pot.
I cook the chicken until (literally) the legs almost fall off. Adding water as necessary. By this time the broth is very rich.
Remove the chicken from the pot and allow to cool. Remove the celery and discard.
Shred the chicken and return it to the pot.
Mix the dumpling ingredients. Dumplings are kind of tricky, they need to be the right consistency, or they fall apart. I added photos (below) to help.
You'll need at least 4-1/2cups broth from the stewed chicken. (Add more water if needed)
Bring the broth to a boil. Drop in the dumplings one heaping tablespoon at a time.
Don't stir or dumplings will fall apart.
Reduce the heat to a simmer, Cover with a lid. (no peeking)
It's really important not to lift the lid for 20 minutes. Once you add the lid, the broth will rise (like a pressure cooker, and cover the dumplings, if you lift the lid, the tops will be mushy.)
After 20 minutes, turn off the burner, and serve. 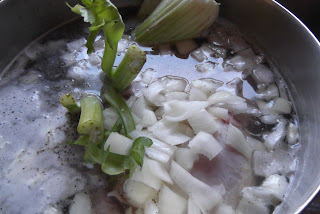 Add the chicken, celery and onion to a 4qt pot. cook until the chicken begins to fall apart. 2-3 hours. 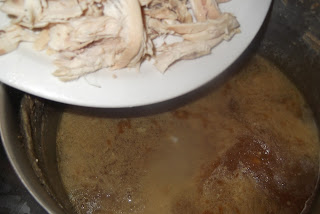 Add the chicken back to the pot, there needs to be at least 4-1/2 cups of broth in the pot, more is better. 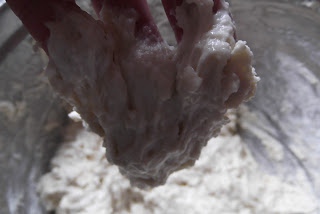 After 3 cups of flour, this is still a bit sticky, add flour a little at a time, until it looks like the next photo. 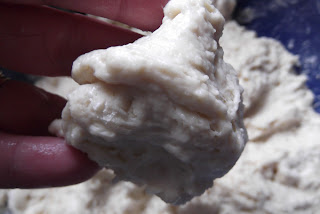 Just right. It is possible to add too much flour, then they become dry on the inside, sort of like a biscuit. I think I've made every possible mistake, making dumplings, over the years. The worst mistake was, not enough broth in the pot, I had to throw out that burnt mess. But, as with cooking any recipe, it's a learning process, mistakes teach you something, so don't give up!