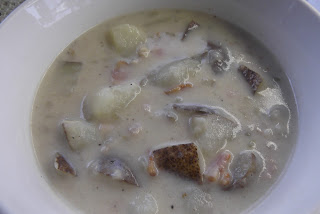 
I once read, that most of the vitamins in a potato, are just under the surface of the skin. If you peel it, you lose most of the nutrients. So, I never peel them anymore, unless I absolutely have to. (My kids once gave me the stink-eye for leaving the skins in mashed potatoes... I had to try.)
Kids really are your most honest critics. This is usually an endearing quality, except when they use this same, said quality, on those craz,...um.. I mean, brave enough to visit a family with 4 energetic children.

Once, while a neighbor lady was visiting, My oldest son, who was about 3 or 4 years old, threw his arms around her waist, chin on her tummy, and said " I love you!... you're the fattest person in the whole world!"
I just stood there, with my mouth unhinged, trying to think of anything to disarm the situation... when she burst out guffawing.
Phew!, close one. You can peel the potatoes if you like, but I think the peel adds a rustic charm to this old favorite.


Preparation:
In a 4quart pot, fry the bacon until it's just starting to crisp.
Add the onion and celery, and cook until the onions are transparent.
Add the water and potatoes. Cook until the potatoes are just beginning to soften.
Add the milk and clams, and bring to a boil.
Turn off the burner and let stand about 30 minutes to thicken further.
Since the potatoes, at this point, are about the same temperature as molten lava, it's probably a good idea anyway.