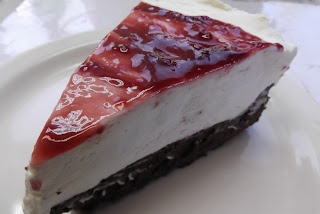 Fudge and White Chocolate Raspberry Torte -the chocolate layer is very moist and fudge-like, topped with a thick, white chocolate mousse, and a raspberry glaze.

Half of my life, I could not stand, anything raspberry, (except eating them off the vine, of course) But something magical happens, when you combine, dark chocolate, white chocolate and raspberries. Oh Good Lord! Now I use this combination a lot.
This dessert was originally from a recipe I found in a magazine, several years ago. The fudge torte part of the recipe, that it used, was kind of hit and miss, But I found a really stable version that I'm posting here. I can't remember the sources of the recipes, so I can't give them their dues. Over the past few years, dark chocolate has become widely available, so you could exchange it, for the semi-sweet chips, and leave out the cocoa. Although I haven't tested it yet.

Preparation:
Preheat oven to 400*
Spray a 9inch spring-form pan with cooking spray.
Melt the butter, over a low flame. Whisk in the cocoa. Stir in the chocolate, until melted. Whisk in the egg yolks, cook, whisking constantly, 1 minute more. Set aside to cool completely. about 30 minutes.

Once the chocolate has cooled, beat the egg whites, until stiff peaks form. Fold gently, into the cooled chocolate, until well combined.
Pour into the prepared pan and bake 20 minutes. The center will still be jiggly, but it will continue to set as the cake cools. Place the pan, on a wire rack to cool completely. (more than an hour) Then refrigerate until firm. leaving the cake in the pan.(I make the cake the night before, and make the white chocolate layer, the next day.)


For the raspberry glaze:
Whisk together, 2Tbl. raspberry jam and 1tsp. hot water

Preparation:
Melt the chips with 3Tbl. of the whipping cream. Set aside.
In a medium bowl, beat the cream cheese until fluffy, then beat in the confectioners sugar.
Add the melted chocolate, to the cream cheese and beat until well combined.
In another bowl, beat the remainder of the whipping cream, until stiff peaks form.
Gently fold the whipped cream, into the cream cheese mixture, until well combined.
Remove the fudge torte, from the fridge, and spread the white chocolate layer, evenly over the cake.
Refrigerate at least, 1 hour. Make the glaze, and set aside.
Remove the cake from the fridge, and spread the glaze evenly,
Remove the sides, from the spring-form pan, and serve. 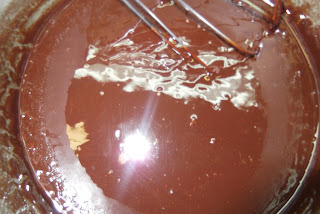 For the cake: melt the butter, add the cocoa and chips, whisk until the chocolate has melted. Stir in the egg yolks, cook 1 minute longer. Set aside to cool completely. 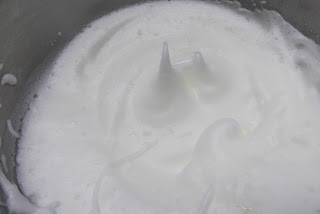 Once the chocolate has cooled, beat the egg whites, until stiff peaks form. 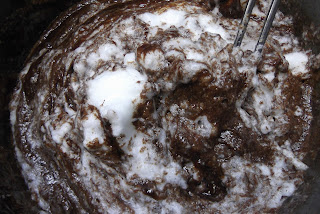 Gently fold the egg whites, into the chocolate, until well combined. Pour it into the prepared pan, and bake 20 minutes. 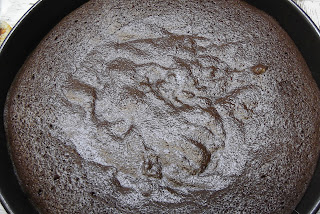 The center of the cake will still be jiggly, when you remove it from the oven. Put the pan on a wire rack, and cool completely. Then put it in the fridge until firm. It will become very dense and fudgey. (about 2hrs.) 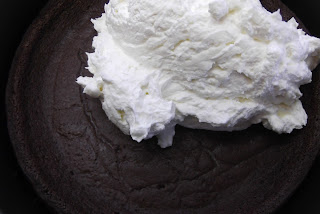 Make the white chocolate layer, and spread it evenly over the cake. Refrigerate at least an hour, or until the mousse becomes more firm. 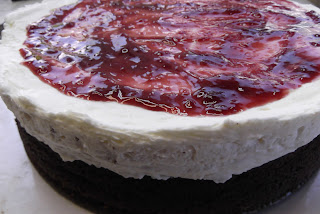 Spread the raspberry glaze, over the center, and about an inch from the edge of the torte. Remove the sides of the spring-form pan, and serve.