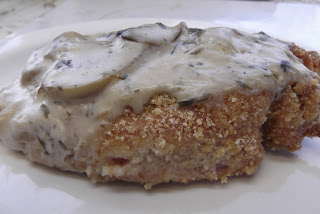 Mom once went to visit her sister, for a week, in Colorado, when we were kids. That's when I discovered, Dad could cook.
I knew he could make chili, grilled cheese, hamburgers, and the like. But, when he called us to dinner, one night, I was shocked. He had fried, pork chops, put them on a cookie sheet, spread cream of mushroom soup over them, then baked them until the soup became a glaze. Wow, it was fantastic. It instantly became a family favorite.
This is the way I make it now, a no-oil, fresher tasting, variation of Dad's dish.
(I bake the pork chops in a roaster with a rack, but you could also place a cooling rack, or similar in a baking pan)

Preparation:
Preheat the oven to 375*
Whisk together the breadcrumbs and salt in a bowl.
Dip the chops into the buttermilk, allowing any excess to drip. Dredge them through the breadcrumbs.
Place them on the rack of a roasting pan.
Bake about 1-1/2 hours, or until the they are cooked through and beginning to brown.
Meanwhile, make the sauce.
Melt the butter in a large saucepan.
Add the mushrooms, onion, garlic, tarragon, salt and pepper.
Saute until the mushrooms are tender.
Stir in the flour, until combined, then add the half and half.
Stirring constantly, bring almost to a boil, then turn off the burner.
Allow it to cool, then refrigerate until needed. (It will thicken, further as it cools)
Once the chops are cooked through, place them on a cookie sheet and spread the sauce over them.
Bake an additional 20 minutes, or until the sauce becomes a glaze. 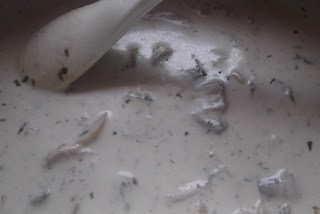 While the chops are baking, make the sauce, cool then refrigerate. 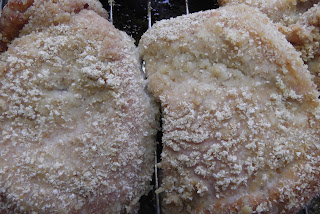 Bake the chops, until they are cooked through and beginning to brown.
(They will brown further while you are glazing the sauce.)