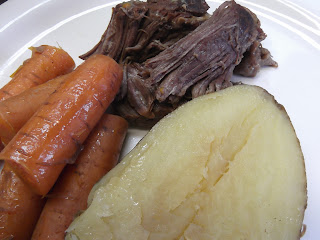 As far as taste is concerned. I prefer roast cooked on the stove-top, over the oven, or crock-pot methods
I used to brown the roast in butter first, until a happy accident happened one day.
On my day off, about 15 years ago, I had promised to make a roast for my family. But I was unexpectedly called in to work. I got the roast started in the pot, and gave my husband instructions, to finish it. Just keep adding water for three hours, pretty simple.
When I came home, he met me at the car, with- "I burned the roast."
Judging from the look on his face, he must have thought I was going to be pretty mad, lol. I thought I'd tease him for just a little while, and pretended, it was the end of the world. I gave it a taste, to see if it could be salvaged, but instead, I found a better way to cook it. Wow, it was way better, than any roast I ever made. Even the carrots and potatoes tasted better.
After asking him what he did, he said "I accidentally, let it run out of water."
The next time I made a roast, I had him show me, exactly what he did. Apparently, his technique is... Start the roast...Then go mow the grass, or whatever, but just totally forget about it, until you smell it burning, and the house is filling with smoke. Then...make a mad dash, for a glass of water, refill the pan, and open all the windows. I use his 'technique" but I don't let it brown, as long, as his tutorial. I bow to " The Lord of the Roast."

Ingredients:
a 2 or 3lb. chuck or round roast (I prefer chuck)
1 whole onion-peeled
1-1/2 Tbl. Lawry's seasoned salt
1-1/2 tsp. garlic powder
1/2tsp. black pepper
Lots of water
1 or 2lbs. of carrots-halved
1potato for each person-sliced in half horizontally-peeled or un-peeled

Preparation:
In a 4quart pan, add the roast, onion, and seasonings. Fill the pot 3/4 full of water.
Cook until the "water runs out" and the pan drippings turn a rich brown. Quickly add 2 cups of water, to stop the browning, or it will burn. (I added a photo, to show you) This could take anywhere from 1-1/2 to 2 hours, I haven't actually timed it.
Add the carrots to the pot, and fill the pan 3/4 full again.
Once the carrots are just starting to get tender, Add the potatoes, and refill the pot with water.
Cook until the potatoes are soft and serve.

I often make a side dish, for the roast, out of the broth. Add a little more garlic powder to the broth, and throw in a package of egg noodles.
Once the noodles have cooked, add a package of brown gravy mix. 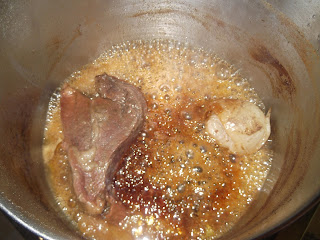 I pulled out some of the roast, to show you. It's almost out of water, and just beginning to brown. 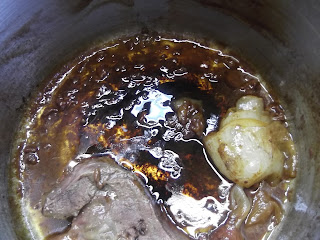 I brown it until it's almost burned. Then quickly add water. 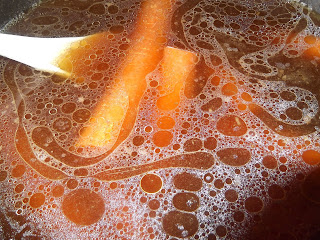 Add the carrots, and refill with water. 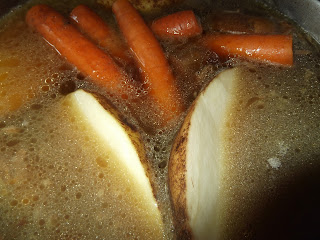 Once the carrots are starting to soften, add the potatoes, and enough water to cover. cook until the potatoes are tender.