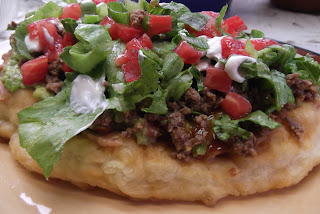 Indian Taco- Oops, forgot the cheese! This is my favorite way to eat a taco. You could attempt to fold it, like a taco, but it's easier to use a fork.

When my kids were growing up, one of our favorite summertime outings, was going to any All-Nations Powwow, that came to our area.
Being part-Blackfoot, Cherokee, and Nez Perce, I wanted them to learn about, and take pride in their heritage.
OK... I went for the fry bread, and Indian tacos, too! These are pretty much the same toppings as a Mexican taco, except I use bison, the fry bread makes these unique, and really good. Buffalo meat is lower in fat and cholesterol, than beef. It has a very similar taste, and is not gamey, like venison can be.
Here's a link for The National Bison Association. There's a lot of info, plus a vendor search for bison retailers.
When I was a kid, there were a few months, when our grocer stocked beefalo.This is a crossbreed of wild buffalo, and domestic cattle. Those were the tenderest, most flavorful steaks and roast, I have ever had. If you're lucky enough to live near a breeder, you really should give it a try. The best way I can describe it is, it tastes like beef, but beefier. It has an almost, buttery taste too. I can only find ground bison now, and pay $9.00lb. So I don't make these with bison, very often, and use ground chuck instead.

(It's better, to have all the toppings prepared ahead of time, then make the fry bread last.)

Preparation:
In a small bowl, combine the re-fried beans and green chilies. Set aside.
Prepare the guacamole.Refrigerate until needed.
Prepare the lettuce, tomato, and scallions. refrigerate until needed.
In a skillet, brown and chop the bison. Drain fat, if any, and return it to the skillet.
Add the water and taco seasoning to the bison, and simmer until the water has evaporated.
Prepare the Fry bread.
On a warm piece of bread, spread a layer of the bean mixture, followed by a layer of guacamole, a drizzle of taco sauce, sour cream, bison, then lettuce, tomato, scallions and cheese.
And good luck, trying to eat the whole thing!