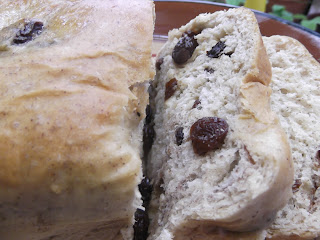 The only times, my grandmother and great-grandmother cooked together, were when they made raisin bread. They would bake from 5:00 in the morning, until dinner that evening. I always loved, waking up to that smell.
They never used a recipe, just pouring the ingredients from bags, and every loaf was amazing. I have a lot of respect for anyone who has that knack. This recipe, on the other hand, took several years of tweaking, to get it the way I like it, lots of raisins, not too sweet, and just the right amount of cinnamon.

Preparation:
Scald milk in a sauce pan. turn off heat and add butter.
In a large bowl combine the yeast, water, and sugar. Allow to rest 15 minutes.
Add 1-1/2cups flour, salt, vanilla, cinnamon and cooled milk to the bowl and beat for 2 minutes until smooth.
Stir in the raisins.
Gradually add the remaining flour, mixing by hand, until the dough forms a ball.
Flour a surface and knead for a few minutes, until you have a soft, smooth dough, that isn't sticky.
Spray a bowl with cooking spray, add dough and cover.
Let it rise about an 1-1/2-hours or until doubled.
Spray a loaf pan with cooking spray.
Punch down the dough, and press it into the loaf pan. Let rise until double, about 1 hour.
Bake at 350*F, until lightly browned.