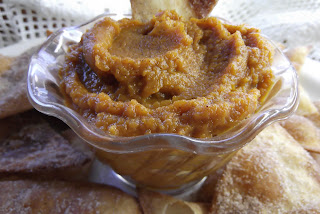 Pumpkin Dip with Cinnamon Chips
In the middle of a hot summer, I had a craving for pumpkin pie.
Too hot to bake, I threw this together and was really surprised, it tastes exactly like it. It's also a fun way to add vitamins to your kid's diet. Give the kid's something they can dip, and I swear they will eat anything.
11% fiber, 8% iron, 4% calcium, 19% vitamin C,  245% vitamin A, and 2g protein.

For the dip:
1 can solid pumpkin
1/4cup sugar
1tsp.cinnamon
1/4cupmilk