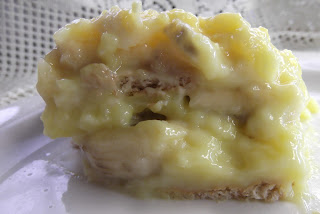 DAAAY-O! - OK  not so pretty, but it really makes up for it in taste. It was supposed to have a layered look but... the best laid plans of mice and grandmas.

My grandkids love The Banana Boat Song. I get a real kick out of watching them sing and dance to it. During a sleepover at grandma's, I was making them a tropical dinner. So I decided to create a tropical dessert  just for them.

Harry Belafonte singing with the Muppets

Preparation:
Place a layer of graham crackers in the bottom of a baking dish. (like a lasagna pan)
Slice one banana and arrange them on the crackers.
Cook vanilla pudding according to box directions, and pour the warm pudding over the bananas.
Add another layer of crackers and banana.
Don't make the lemon pudding according to the box. Instead only use the 2 cups of milk.
Pour over the bananas.
Place another layer of crackers and banana.
Cook the banana pudding according to box directions, pour over bananas.
Allow to cool completely.
After it has cooled Add a layer of bananas.
In a bowl, add instant coconut pudding, drained pineapple and yogurt.
Mix well and spread over cooled desert.
Refrigerated overnight to soften the graham crackers. 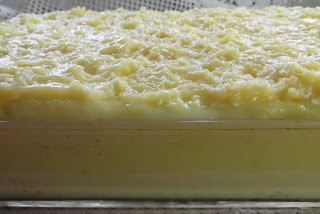